Positions for PHP/MySQL, C/C++, flont-end developers, QA engineers, DBA and others - in our Moscow office 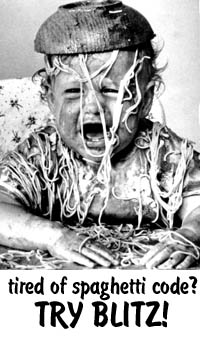 Australia became 2rd in our traffic rating (after Russia - which I just don't count as it's obvious - but leaving Ukraine far below!). Thanks a lot, folks! Also many thanks to users from Ukraine, Belarus, Netherlands, Kazakhstan, UK, USA, Brazil, Spain, France and Poland.

If you are experienced developer who just needs to start working with Blitz very quickly - read this "Quick Geek Tutorial". It's quite old though - please refer to the Template or View API for new methods and features.

The most probably question you ask, viewing this document for the first time is: "What? Yet another template engine? What for?". Here comes a very short explanation.

Blitz is a templating engine with two main features:


These are my own development values which were formed through my own experience with large-scale internet projects. Note, this all comes mostly from "management", not "programming", and has influence on large projects particularly. Let me explain this all briefly.

Is "fast" important? Talking about the speed I'm sure 99,9% of projects are not CPU-bound. But large projects are. Most of top projects have thousands frontends serving billions requests per day (top of the top has even much more). Performance management is a field of special importance here. Usually storage/application services are tuned as much as possible and CPU usage on frontend boxes is, well, not bottleneck, but one of very important degrees of freedom. Crooked solutions which scale badly will significantly increase your total cost. From my personal experience presentation code may eat up to 30-50%% CPU for the dynamic page generation in a "good" project and up to 100% in "bad". Think of that: your frontend CPU spends most of the time just building result HTML! It is very important to decrease this value. With Blitz you won't spend much CPU on presentation level (see benchmark results below).

Is "clear" important? Talking about the simplicity of presentation code I'm absolutely sure 99,9% of projects can be written in plain PHP and happily supported through years. Plain PHP is probably the best solution from the performance point of view as well. There's one problem though. Supporting the mess of PHP and HTML in a big project is usually just a nightmare. Large projects usually have large codebase and a lot of problems appear while trying to manage PHP+HTML spaghetti in presentation code. This happens because modern, personalized applications have very complex presentation logic and this all tend to change intensively. This logic should be written, owned and supported by developer (I also suppose here that HTML/CSS competence is much different from programming so developers better don't touch this stuff at all - and vice versa). But when you have PHP code together with HTML and Javascript in templates - the ownership and the responsibility is too fuzzy. That's why I always wanted HTML/JS guys to keep their hands off the presentation logic. I do know what happens otherwise when this part of application is "shared". That's why I wanted to maximally separate HTML and view logic. I wanted to see the code, with no HTML/Smarty/PHP/Whatever spaghetti mess. I wanted developers to work with the code, with no HTML or JS around. Well, that is a some kind of management philosophy. You just feel this "right" - or not :)))

I started this project in 2005 as a replacement of php_templates by Maxim Poltarak, a very fast PHP template engine which was popular in ealy 200x mostly among developers in former USSR countries. This engine was unjustly rejected by PHP team long time ago (they didn't let it into PECL for absolutely childish reasons) so the project was frozen and got no further developments. I took most of "design" concepts from php_templates and thank Maxim for his great project.

To extract the code and build the extension just follow these simple steps: To test blitz run the test script run-tests.sh. You need to edit this file to change the path to the standart PHP test routine run-tests which comes with PHP. Running the tests you will get something like this: If Blitz was build as shared module you will probably need to edit your php.ini and include Blitz in extension list: